This week I want to discuss how I got started. This is how I managed to get over staring at a blank page, wondering how to begin.

I started by thinking about the sort of patterns I find attractive. A few years ago I became interested in tribal fusion, mainly due to the incredible videos of Zoe Jakes and Rachel Brice, which led to some exploration of Mehndi. I really enjoyed drawing these patterns once I began recognising the common shapes and patterns. At the time I started incorporating this into my portfolio pieces and although it’s not something I’ve used for a while, I decided with my basic understanding that mehndi could make a very good starting point for my mindfulness drawings.

Secondly you can see clearly here where I have added in some straight lines to segment the page. The first week’s drawing was a real discovery and I slowly learned that it was easier to almost force a break in a pattern to avoid getting caught up in concentric circles. Additionally, as I’m not using any drawing tools except a pen, I learned that drawing straight lines is a lot easier in one quick motion rather than going slow and steady. Also thickening a line afterwards can hide any wobbles!

You can see the influence of mehndi a bit more clearly in this week’s pages. It’s also a lot denser and darker. I think this is due to feeling more confident about the patterns I’m working with and the effect of the solid black ink against the page. It’s very strange for me to be working in finites but it’s quite freeing to be working with absolutes. 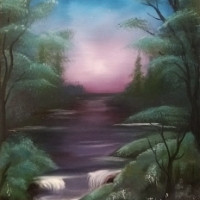